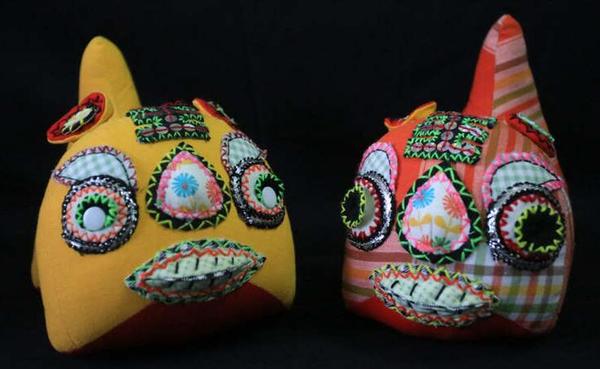 Vivid cloth tigers made by Lei Zhichao, from Huaiyang county of Henan province.

Lei Zhichao, a 54-year-old farmer from Huaiyang county of Henan province, is an intangible cultural heritage inheritor, who has been obsessed with creating cloth tigers for decades.

Cloth tigers originated from ancient totem worship. The old legend said that in ancient times, due to the collapse of heaven and earth, there were only Fuxi and his sister left on earth. They went to find spouses, but when they could find no one else, they had to marry each other. Fu Xi was too shy, so he dressed up as a tiger to marry his sister. After the marriage, the human race could continue. Cloth tigers are not just for decoration but also a way to respect human ancestors Fu Xi and Nv Wa.

The creation of a cloth tiger requires many steps including dyeing cloth, cutting, modeling and painting. Skillful people can make a dozen of them every day and the price is cheaper than handmade embroidery ones.

"I want to use my efforts to develop the craft and let more people get to know cloth tigers. My biggest wish is to establish a museum on Huaiyang cloth tigers", Lei said. "Inheritors are not easy in every industry, and they usually pay more than achieve, while they all hope to better pass on their skills."