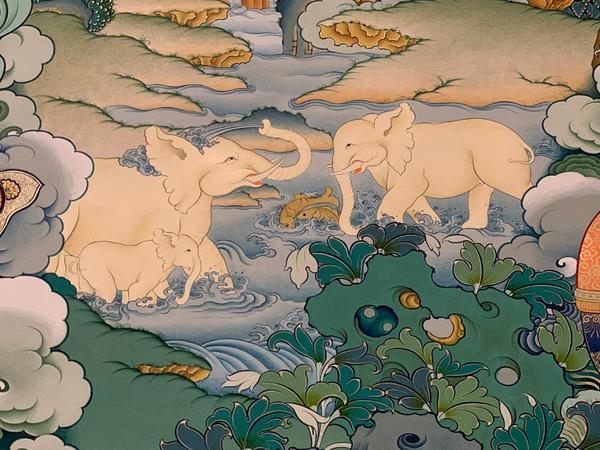 A completed part of Nyangbon's ongoing project of a 1,000-meter-long thangka scroll that shows the development of Tibetan Buddhism and a spectrum of Tibetan culture. [Photo provided to China Daily]

Since he started learning thangka painting at age 12, Nyangbon, now in his late 40s, and a generation of other artists have dedicated years to the revival of the ancient Buddhist art form.

Seeing the interest of young people in preserving thangka, Nyangbon, a master painter from Northwest China's Qinghai province, says it's time to take the revitalization a step further.

Five years ago, Nyangbon launched an ambitious project to paint a 1,000-meter-long scroll that shows the development of Tibetan Buddhism and a wide spectrum of Tibetan culture.

Nyangbon, being the scroll's chief designer and lead painter, is working with dozens of senior thangka painters, and so far the team has completed some 500 meters of area.

Nyangbon displayed some 30 meters of completed parts at Buddhist Sublimity, an exhibition at the National Art Museum of China that ended on May 5. It also showed dozens of his other thangka paintings and preparatory drawings, some of which were made more than 20 years ago and loaned from private collectors for the exhibition.

Nyangbon says the ongoing project on the 1,000-meter-long scroll is to produce "an encyclopedia of Tibetan culture". 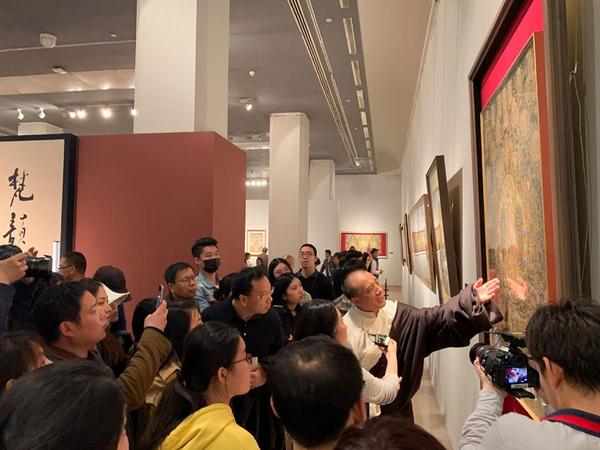 Nyangbon introduces his artworks to visitors in a recent exhibition at the National Art Museum of China. [Photo provided to China Daily]

The lengthy painting seeks to trace the origins of Tibetan Buddhism. It will depict important temples and their surrounding landscape. It will also present the diversity of Tibetan culture to include the knowledge of astronomy, calendars, medicine - featuring diagrams of the human body and pictures of medical instruments - and folklore.

The opening section of the scroll, which was displayed at the Beijing exhibition, shows the Buddha, the 18 arhats and four gods. The meticulous strokes, refined layout and rich colors exemplify a regional style of thangka painting held dear by artists, including Nyangbon, who hail from villages along the Longwu River in Qinghai's Regong area.

Thangka and other arts practiced by monks and artists of Tibetan and Tu ethnic groups in the region are known collectively as the Regong arts - inscribed by UNESCO as an Intangible Cultural Heritage in 2009.

An experienced thangka painter knows how the established measurements of Buddhist deities and teachers are to be drawn on an artwork. The artist has to strictly follow the instructions on drawing lines and figures, matching colors and pattern designs as provided in ancient texts on the art form.

Nyangbon says many young painters, however, can paint only a small number of the deities while knowing little about the drawing measurements of the rest, a reason for which is the demand in the art market for only certain figures such as an avatar of the Buddha and the goddess Tara, although traditionally, many were drawn.

"There are more than 70 bodhisattvas, and yet, thangka collectors today favor only four or five."

He says the production of the lengthy scroll will help to reintroduce to artists and collectors some Buddhist figures that are less visible. The step is an important part of preserving thangka art.

Nyangbon says all artists taking part in the time-consuming project have practiced the art form for at least a decade. They hope to complete the entire scroll in the next five years.